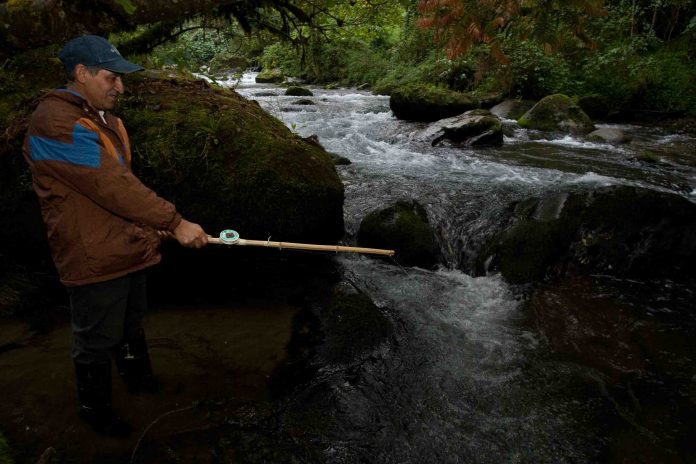 San Gerardo de Dota, a beautiful basin of oak forest and Quetzal birds, was baptized by Caridad Zúñiga after Saint Gerard, the patron saint of motherhood who protects women and children. Doña Caridad had good reasons to pray to the advocate of women and children because in 1963, she arrived to this unpopulated, wild valley with six children, including a six-month-old girl, following her husband’s adventure.

“I was very enthusiastic to come here,” she said. “I came with a lot of hope, but we had to work a lot – too much.”

This valley is located in the Talamanca Mountain range in the folds of the Cerro de la Muerte Mountain. At an altitude of 2,200 meters, it has dense could forest and is populated with massive oak and laurel trees, among other native species. The animal life includes as many as 170 species of birds.

Don Efraín Chacón Umaña is Caridad’s husband, the man that she follow to an unexplored part of Costa Rica less than 60 years ago.

In 1954 Efraín left his home on a hunting trip, with his brother Federico and six companions, and came across the valley accidentally.

“We hunted a peccary,” Efraín remembers, “but we got so excited with this new place that we tied up the dogs and took our time to explore.”

At that time, the Costa Rican government was giving land property titles to those who could prove that they had worked an unclaimed plot successfully for 10 years.

“We had nothing and here we didn’t have to buy the land,” Efraín recalls. “The forest was so beautiful and totally untouched.”

During the first two years the two brothers hiked back and forth from their home town (Santa María de Dota) 12 hours away to their soon-to-be new home. They spent their nights inside a little cave under a big rock on the side of the mountain.

“It was very uncomfortable,” Efraín recalls, “but we didn’t want to use our time building a shelter.”

Carrying all their supplies and food on their backs, the brothers planted carrots, corn and spaguetti squash. Getting their harvest out of the valley was very challenging, so they decided to start breeding pigs.

“We used to say that the corn would leave the valley walking,” Efraín recalls. “We would feed the pigs with the corn and carrots and chiverre, and then we would make them walk up the mountain to the road to sell them.”

It was not until 1969 that the government cut a road between the small, but growing community and the Inter-American highway about nine kilometers above. By then, the family had cattle and was making cheese to sell in San José.

“We were the first married couple in this valley,” said Caridad and Efraín speaking proudly of their family. They not only started a whole new community in an unknown place, but they also managed to raise 11 children along the way.

“We used to joke that 11 children were not enough,” Caridad said laughing. “And that there was so much work to do around here that more children could only help.”

Today, several of their children, grandchildren and great-grandchildren still live and work in the valley as tour guides and bird watchers, at the family’s well-known hotel and restaurant, the Savegre Hotel Natural Reserve, and on several trout farms, and fruit orchards.

The whole fruit story started with José Figueres Ferrer, the Costa Rican ex-president who abolished the nation’s army in 1949.

“I met Figueres because we fought together in the 1948 civil war,” Efraín recalls. “He used to come down here to fish and he always said that apples would grow well here, so one day he brought the first cuttings of Israeli apples in 1978.”

Once they realized that the apples did well in the valley, they started planting peaches and Japanese plums.

“First we used to sell the fruit on the side of the road,” Efraín said. “Now we take them out in trucks and sell them all over the country in the WalMart supermarket chain.”

The valley’s few visitors in the late 1960’s, like Figueres, came for the trout fishing.

“Since there was nowhere to eat or drink, they would ask my wife to prepare something for them,” Efraín said.

In 1970, he and his wife built a couple of rooms to lodge visitors, and offered homemade meals at their house.

The valley then began to create a name for itself for the good fishing and the impressive natural beauty. The business started to grow and they kept making more rooms. Today, the hotel boasts over 45 rooms. Originally know as Cabinas Chacón, the hotel is now famous as the Savegre Hotel Natural Reserve and is visited year around, especially by those that love birdwatching.

“I really like this kind of tourism,” Efraín said. “They are tranquil and eager to learn; We share our ideas and increase our knowledge”

The voice of wisdom

Don Efraín has an advice for young adventurers: “You have to have heartfelt enthusiasm for what you do… I always wanted to have a piece of land of my own, and now I feel really proud of what I have done here. We got to a place where there was nothing and now we have had people coming down from National Geographic, BBC, and many other international magazines. This is not out of vanity – I have the satisfaction of living with integrity. I think we just got it right.”