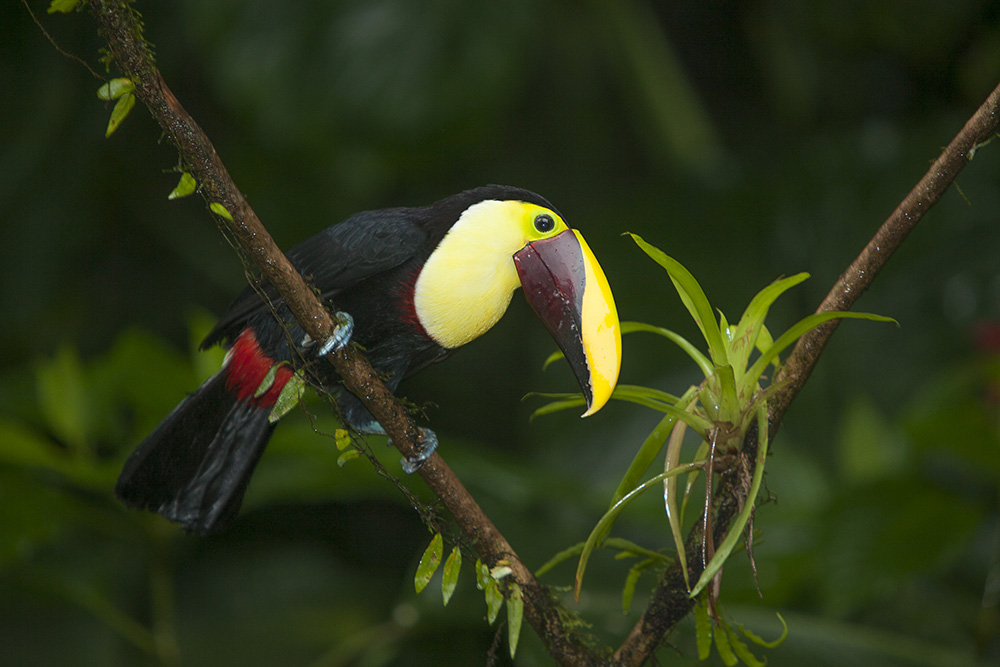 Besides some childhood memories of a fruit loop eating toucan named Sam, what do we really know about the toucan?
Lately, Costa Rican toucans have become more and more famous, even if they lose their amazing beak-like Ojalá, a keel-billed toucan who made it as far as Animal Planet when he got a prosthetic beak that allowed him to eat after it was cruelly abused resulting in it losing its upper mandible.
Do you want to learn more? Here is a little article about the various toucans that inhabit the forests of Costa Rica.

Costa Rica’s largest toucan and amongst the largest in the world, this impressive creature inhabits lowland forests on both sides of the country. This toucan is about the size of a large crow before you add the roughly 20 cm (8 inches) beak. Like most toucans, this opportunist eats a variety of foods including fruits, seeds, young birds, lizards, and rodents.

This medium-sized bird is found only along the Caribbean coast and in the north pacific. Just like its larger cousin, this toucan has a predominantly black-and-yellow body, but its beak is a bright collage of colors. Most toucans are gregarious and travel in small flocks, and the keel-billed is no exception.

These smaller toucans, known as aracaris, are virtually identical except for 2 things. The first is their ranges; fiery-billed aracari can only be found on the south Pacific slope, and collared aracari can only be found on the Caribbean slope and north Pacific. The other major differentiating factor is their bills, with the fiery-billed aracari showing true to its name with flame coloration and the collared aracari having a more black-and-white pattern.

The most secretive and difficult to see toucan in Costa Rica, the yellow-eared toucanet lives in a small band of mid-level rainforest along the Caribbean foothills. While most toucans like to perch on prominent branches in the canopy and at the edges of the forest, this difficult to see bird prefers to be slightly more hidden. It is also the only toucan with male and female showing different markings.

If you are lucky enough to see any of the country’s toucans, enjoy their bright coloration and comically large beaks. They truly are one of Costa Rica’s most impressive flying creatures.