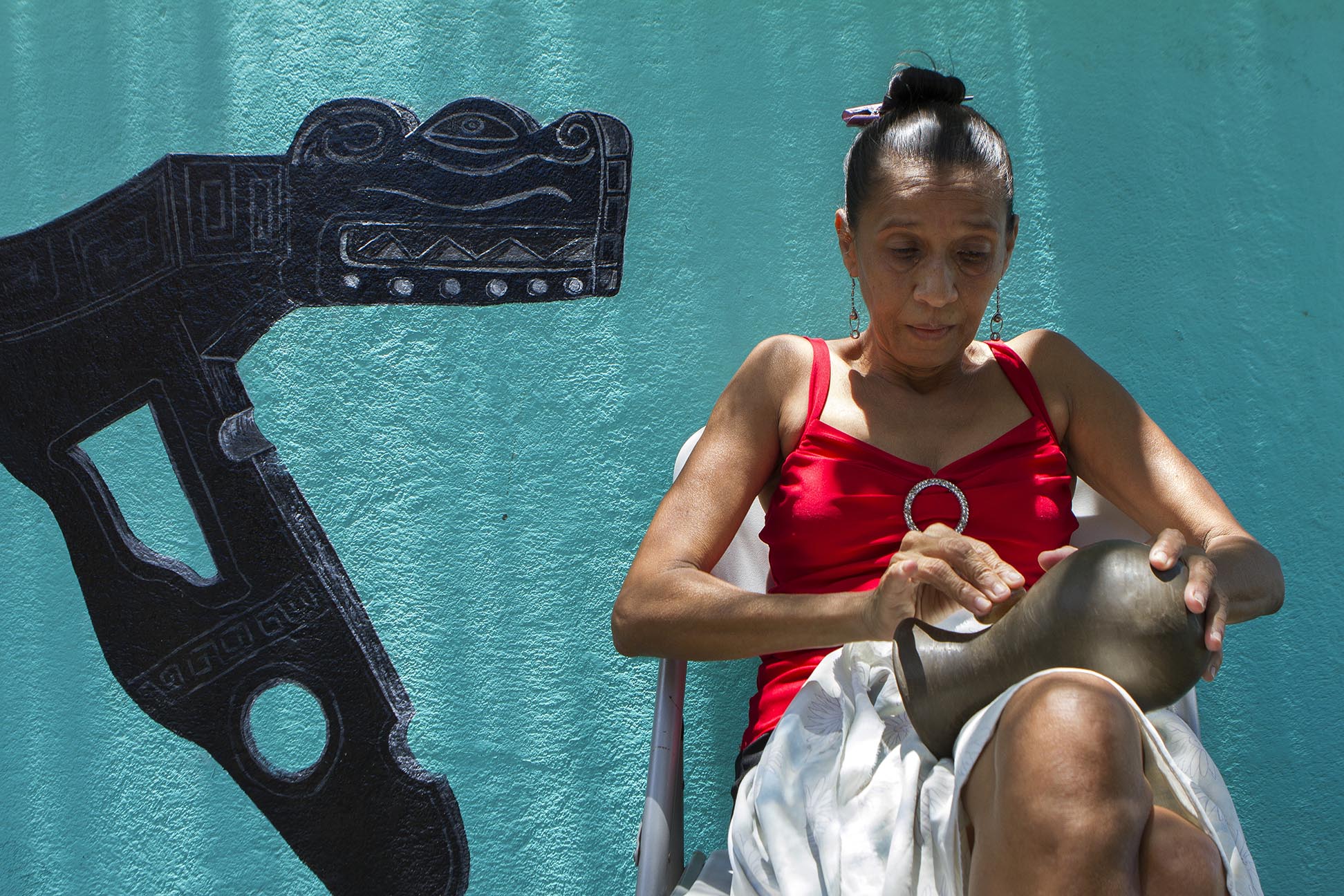 Women from Guaitil find ways to preserve their art

Under the shadow of a roof that shelters her from the typical heat of the northwestern province of Guanacaste, Melesia Villafuerte, a 57-year-old artisan, hugs a pot on her lap. With great care, perseverance and patience, she polishes the piece using various tools, including a stone that she inherited from her mother.

If you visit the community of Guaitil, located in the Guanacaste canton of Santa Cruz, you will probably be lucky enough to come across a scene like this on the porch of the Coopeguaytil store, where member artisans come to make a comal (a traditional griddle), a pot, or a decorative craft, using techniques and tools that they have inherited from their indigenous Chorotega ancestors.

The cooperative offers one of several handicraft stores in the center of Guaitil, with others in the neighboring community of San Vicente. Coopeguaytil brings together artisan women from Guanacaste’s very first town.

“Coopeguaytil was created in order to market the product of the artisans,” explains Coopeguaytil member Nury Marchena, representative of Coopeguaytil. “Many of my colleagues have workshops in their homes and cannot sell their products there. This point is ideal for sales by fellow artisans, so we organized ourselves as a cooperative to see how we could get ahead.”

This group began to take shape in 1997, and in 1998 it became a reality. With the help of the Cooperative Development Institute (Infocoop) and the Permanent Commission on Self-Managed Cooperatives, they were able to acquire their current premises, in which an old cooperative was located.

With initial financing, “we bought material and brought in what we each had in our houses. So we grew. We helped many people in the community. We gave support to families who came and told us about their problems, so we bought part of their product to help them out,” adds Marchena, a craftswoman who learned her trade at 14 years of age..

The women went on like this for many years, until about seven years ago they suffered a robbery that affected them deeply. “They stole everything from us. They left us bankrupt,” Marchena relates. “We left disappointed, each working in her home with what she could… They took our computer. They took everything from us.” The business had to close.

The cooperative was inactive for five years. However, after seeing how their premises were being invaded by drug addicts and alcoholics, the women decided to start over and restart the cooperative with what little they had.

“In 2019… we came back again with our own products. We cooperated with each other; we each gave two thousand pesos a month (2,000 colones, or just over $3) and here we go,” Marchena says, adding that members also defray basic expenses such as electricity, water and garbage collection by running with a small soda, or restaurant. A partner of the cooperative manages the soda, which is not turning much of a profit right now because few visitors arrive.

Months of uncertainty and fear

The COVID-19 pandemic has had an enormous impact on the entire country and the world, and the same is true of this small town located just 15 minutes from downtown Santa Cruz.

“Because of the pandemic, we were closed for six months. We did not come in for fear of this COVID, for our own safety and other people’s. Besides, no one was coming here. Only recently do you see a few businesses starting to open,” says Marchena.

During those months, the artisans did not sell anything at all; now, they are experiencing a bit of movement.

“These last two months we have managed to scrape something together. Here we go again, and we will wait to see what happens,” she says.

Despite one blow after another, these artisans have hope for the future.

“With this pandemic, we know that there is a force preventing us from moving forward because no customers come, but it allows us to move on and wait for the new opportunity, because… I feel that this will be good in two or three years, ” says Marchena.

The cooperative has five active founding members, some of whom have retired due to health problems as they are older adults, while the children of some members support the organization.

Nury Marchena, Melesia Villafuerte and Yolanda Villarreal are three of the Coopeguaytil members who live closest to the cooperative’s premises. This year, they decided to come in every day to attend to the store and also to make their crafts, tasks they combine with their labors at home.

Marchena lives in San Vicente, but she also has a house and her business in Guaitil, almost directly across from the cooperative. She goes from one place to another, attending to the affairs of the cooperative, her own home, and her grandchildren.

All of these women run their homes alone as the heads of their households. Villafuerte and Villarreal also take care of their grandchildren or help their daughters with housework so they can study, work, or both.

For this reason, these artisans take turns running the store and helping each other get ahead, depending on their shared will, hope and, above all, love for what they do.

Marchena, who will turn 60 in April, has been a craftsman since she was 14, when she learned how to prepare clay and pigments. Although for a time she moved away from the trade, this artisan born in the neighboring town of San Vicente took it up again once she was married and living in Guaitil.

She was a little rusty, relating that “I prepared the clay alon: at first the pieces would break. It took five years to become what I am today. At the age of 22, I started making my pieces without breaking them. Now I have a lot of experience.” As a child, Marchena learned from her mother, her maternal grandmother, and her paternal grandparents, who made jars, comales, and their pots for cooking beans.

“I love it. It’s my job, and it’s something I like because one learns so many beautiful things like adding a little leg, how to design this drawing with that love, working on the design of that piece,” she says.

Melesia Villafuerte, 57, specializes in polishing pieces with stone, a technique she began learning when she was 16 years old. The casserole dish that she hugs on his lap is smoothed over and over by the stone in her hand or a plastic paddle made from a shampoo bottle.

The stones used are pieces that indigenous people have sourced from the mountains for generations. The stone that Villafuerte uses was inherited from his mother and even has a name: “La Llorona,” just like the weeping mother of Latin American legend.

“It’s called La Llorona because once it was stolen from me and I sat crying and crying on my porch. It turned out that a boy had stolen it from me. Thank God: he gave it back to me once he saw that I was crying,” she recalls.

Behind a long table and with the help of a roller to turn the piece, Yolanda Villarreal, 63, is shaping a lid for the casserole that her partner Melesia is polishing. In addition to her hands, which mold the lid with the skill acquired through years of work, Villarreal uses a plastic spoon, a gourd spoon, a knife, leather and a dried corn cob, stripped of its kernels.

“When I see my finished work, I say, ‘How beautiful!’ I ask Diosito (God) to give me more strength to make more little pieces,” says Villarreal, who began learning her art at age 14.

Chorotega artisans use clay and sand as raw materials. The clay called barro bayo that is extracted in San Vicente is used for decorative pieces, while black clay ,selected for its resistance,is used to produce kitchen utensils such as comales, casseroles and pots.

Another basic element of this craft are the pigments used to decorate the pieces. Artisans obtain these from private farms located in Diriá de Santa Cruz. There “we find white, red, orange and yellowish pigments,” Marchena explains.

She says that the blues and greens now common in handicrafts are not traditional, but are used because tourists look for them. However, “we tell the tourist that the traditional colors are terracotta, white, black, brown, gray, orange. Those are the ones that come out of the pigments” that have been extracted from the Santa Cruz mountains for generations.

Firewood is another raw material for the artisans of Guaitil and San Vicente, as each piece is fired in the ovens that the artisans build in their homes with materials such as clay.

Artisans must buy the clay and pigments from the owners of the private farms where they are located. That’s why a project is underway to help Coopesanguai, which brings together artisans from Guaitil and San Vicente, to acquire one of these farms. If it’s successful, this will allow the cooperative to extract and sell these fundamental raw materials to its members.

“We also want to see, through Coopesanguai, how we can reforest wood that we need, to protect the environment. This is how we contribute to nature,” concludes Marchena.

Location: west side of the Sports Plaza in the community of Guaitil, Santa Cruz, Guanacaste.

Those interested in the artisans’ work can all contact doña Nury Marchena at 506-8530-7765, or by email at [email protected]. 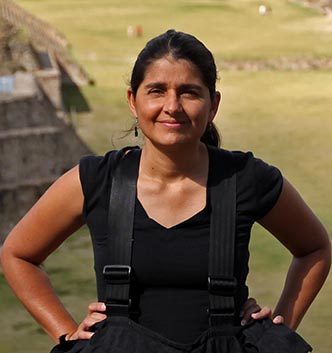 How to build a community network for suicide prevention

Should psychiatric hospitals cease to exist?