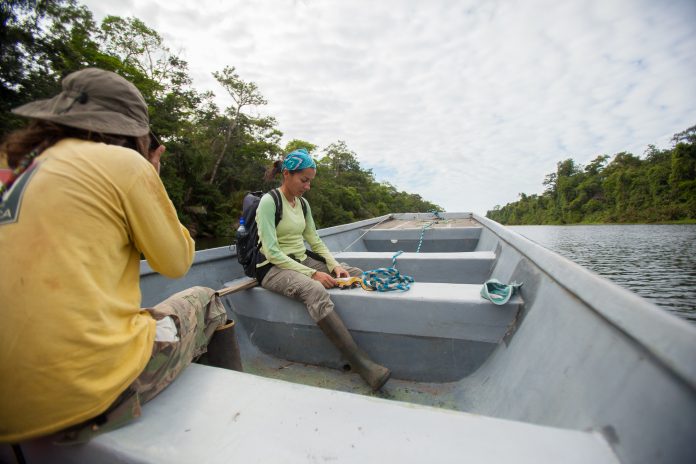 Who would not like to see a jaguar in its habitat?

We’d all like to, right? Stephanny knows the feeling. She’s dedicated more than a decade to studying these and other wild cats. She took some time out from her work to tell us how she came to this field of study and what she wants the future to look like.

The following are excerpts from her comments, edited for clarity.

When jaguar meets and sea turtle, a researcher bloomed

It all started in 2009 when I worked at the Barra del Colorado Wildlife Refuge. At that time, I was dedicated to supporting Global Vision International (GVI) at its sea turtle nesting projects in Barra del Colorado and in Tortuguero.

Our objective as students and researchers was to protect sea turtles and their eggs from their predators, but it turned out that there was one that we could eliminate, nor did we want to: jaguars. Tortuguero National Park is one of the few places in the Americas where jaguars prey on sea turtles.

At that time, almost nothing was known about this relationship between jaguars and turtles. The number of turtles eaten annually by jaguars was not even known. That’s why I decided to return to school for my master’s degree and focus my thesis on addressing the jaguars’ predation of the sea turtles that nest in this corner of Costa Rica.

My original research plan was to dedicate six months to field work, but thanks to the support of different donors, as well as the interest of Tortuguero Conservation Area (ACTo), it ended up lasting much longer. In 2013, I co-founded the Coastal Jaguar Conservation project with the ecologist Ian Thomson.

Our initial goal was to obtain scientific information on a little-known behavior of the jaguar and the predation of the sea turtles that nest in Tortuguero. Over the years, however, this research became a lifestyle and passion.

The results we’ve achieved through our research have not only taught us about this animal—for example, showing the social behavior of a feline believed to be a loner—but also helped the Tortuguero Conservation Area make management decisions. These decisions help guarantee the long-term survival of the jaguar and the habitats on which it depends, thus protecting many other species.

When I started my career as a biologist, I did work related to environmental education. I quickly realized that I didn’t have the skills to be a good educator. However, by finding my passion in the study of jaguars and other cats, I have found the educator that is hidden inside me. In our project, we take time to share with local communities the importance of Tortuguero National Park in conserving the largest feline in America. We promote coexistence between local communities with the jaguar; they are neighbors, after all.

Today, I am pleased to be working for the PANTHERA organization coordinating the ‘Wild Feline Genetics’ project. This combines two passions, my interest in wild cats and my love for dogs.

One of my passionate co-workers is named Tigre (Tiger). I’ve been in charge of this Labrador retriever since 2008. He’s trained to detect the feces of the six species of wild cats that inhabit Costa Rica. He and I walk the forests of Costa Rica to find these feces and, from them, obtain information not only on genetics but also the diet and health status of a species. This is essential for developing management and conservation measures.

I have always thought that my career is not defined by my gender. As far as I know, I have never been discriminated against for being a woman. However, I also know that this should be the norm and not something noteworthy.

Both through Coastal Jaguar Conservation and PANTHERA I have had the opportunity to work and meet excellent people—National Park Service (SINAC) and NGO officials, researchers, members of local communities—with whom I share an interest in conserving not only wild cats, but of wildlife in general. I cannot say that in my entire career there have not been moments of macho attitudes. Of course there have been! Fortunately, they have been isolated cases.

I believe that gender equality must be applied in all aspects of our life and taught in each family. Simple things like sharing household responsibilities: keeping clean and cooking is everyone’s responsibility. Not just girls should learn to cook! This is key so that discriminatory behaviors or attitudes towards women are eliminated starting from childhood, and it is also an empowerment opportunity for both boys and girls.

I have observed that in rural areas, it is sometimes harder to access quality education: for example, there are buildings in poor condition, limited internet access, perhaps fewer economic resources for cutting-edge technology. This barrier should be removed so that all children’s education allows them to compete on equal terms when opportunities arise. For example, in the area of ​​research: instead of being the baqueanos, the local guides and jack-of-all-trades, they can also lead research efforts carried out in their communities. I hope that in the future, students from Barra de Tortuguero or from a nearby community will join our ranks as biologists, contributing to our research and leading many others.

It would also be interesting to promote dialogue between kids interested in research, and professionals not only in Costa Rica but in other countries as well. With today’s technology, we can easily connect virtually and exchange experiences. I would have liked to have had this option when I was a child or even before choosing my major, because sometimes the fear of not knowing where I could work as a biologist made me want to choose an “easier” career, at least in the sense that having a more secure job and salary.

It would be a pity if, due to similar doubts and fears, we miss the opportunity to have more researchers in future generations.