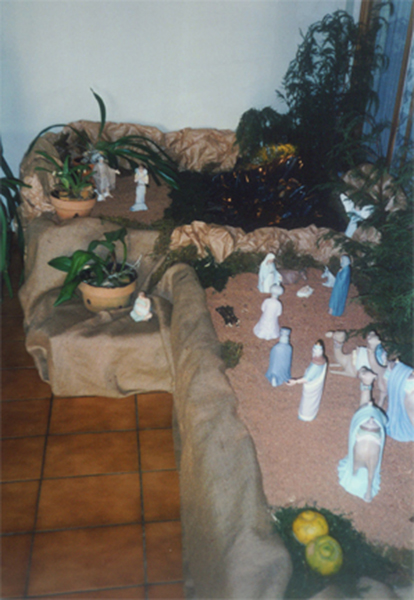 I was 10 years old when I became part of the family tradition. My great-grandmother learned it from her dad, my grandmother officially introduced me, and my dad had already taught me. I remember sitting on the doorjamb looking at that big cardboard box wrapped in Christmas wrapping paper and thinking with enthusiasm that now every year I was going to build my own “little step” with those figures with white complexions and pastel colored clothes that had finished me to give away.

The birth, or “little step” as it is called in Costa Rica, is a representation of the birth of Christ that was initially used to teach history to those who could not read.

In Costa Rica, the tradition of the “pasito” involves more than placing the figures, it is a meeting point, a reason to pray and eat as a family. According to Luis Ferrero, author of the book “La Navidad en Costa Rica,” originally, Costa Rican Christmas celebrations involved a daily prayer in front of the “pasito” between December 24 and January 6. Each prayer was followed by a generous refreshment and then the women made a tour around the houses and crops with lighted torches to ward off misfortunes, such as fires or disease, and attract blessings.

Nowadays almost all Costa Rican homes have a “little step” and they originally deploy it every December, however the prayers have been reduced to one per little step, accompanied by good Christmas music and lots of food. There are other traditions around the “little step,” for example, competitions where the creativity of dedicated builders is rewarded or the age of sets. Another tradition is to give the newlyweds their own set so that they can find their own home.

For many Christmases, together with my father, I built wooden structures with many levels that included a small river in which there was always running water, a gift of modernity that created water pumps. Like the rest of the Costa Rican “pasitos”, our representation of Jerusalem is tropical, with many plants, mosses, flowers and colors surrounding the figures of the family, the wise men and shepherds, and others such as ducks, deer, pigs , chickens and others.

Now I build my “little step” in my own house, while my father continues the tradition in his house using the figures that belonged to my great-grandmother. Now master and apprentice must work separately, and they cannot avoid competing for which of the two “little steps” will be the most original.