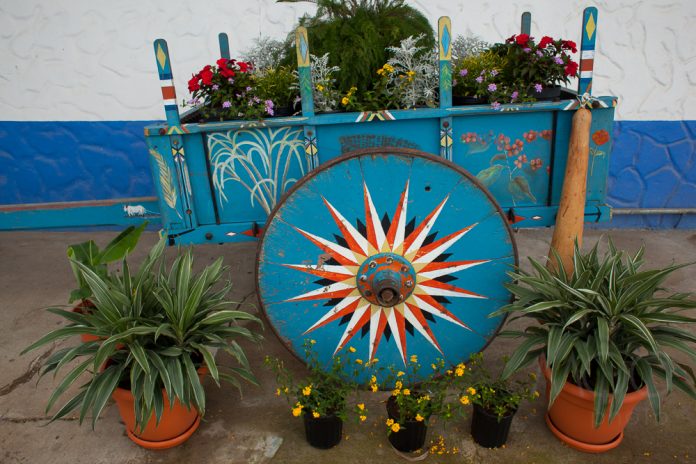 A loud metallic ring marks a slow and almost relaxing rhythm which is interrupted by sporadic cries and snoring. It is the harvest time in the coffee plantation and little by little it is filled with the music that carries the golden grain. That music is the song of the loaded cart, pushed by the oxen that go to the command of the herder.

Costa Rica in the 19th century saw the birth and growth of the cart, an indispensable work instrument in the export of coffee that brought prosperity to the young nation. For decades, the cart transported tons of ripe coffee fruit from the steep slopes of the coffee plantations of the central valley, to the boats docked in the port of Puntarenas. But the ingenuity behind the cart goes beyond being a tool, it is the reflection of a culture.

Costa Rican farmers and cattlemen drew on their indigenous and Spanish roots by joining a wooden disc with a metal ring and thus, making a wheel that does not stagnate in mud. But the wheel, which was also used in other parts of Central America, does more than roll and carve furrows in the coffee plantation mud, the Costa Rican wagon wheel “sings.” The wood and metal of the wheel were carefully selected and assembled to produce a unique ring, which was the pride of the wagon owner.

Over time, paint becomes an indispensable and unique element of each cart. Originally the colors, shapes and landscapes that were painted on the wheels and panels of the cart helped to identify the origin of the herder. However, that decoration was not as ostentatious as we know it today. Costa Rican historians say that the decoration of the cart increases as its use in the hard work of the field diminishes.

For this reason, today, the color of the cart continues to be a reflection of the pride of its owner, but more than representing a specific area of ​​the country, the colors and shapes that decorate the cart are a sample of Costa Rican popular art.

The cart was declared by the Costa Rican government a national symbol of labor in 1988, as an effort to recover a tradition that was beginning to die out in the shadow of the tractors and trucks that today transport the fruit of the Tico land.

In 2005, UNESCO declared the cart as an Intangible Heritage of Humanity, recognizing that the use of the cart is dying out and at the same time the knowledge of how it is manufactured and decorated is dying out.

These two recognitions have given a new importance to the tradition of the cart and the herder, and that is why although their song is no longer heard in the coffee plantations and plantations, it is heard at the festivities and patron saint celebrations of almost everyone the towns and cities of Costa Rica.

At her daughter’s command

What does it take to get a mammogram in Costa Rica?

A public-private alliance, from the public health standpoint