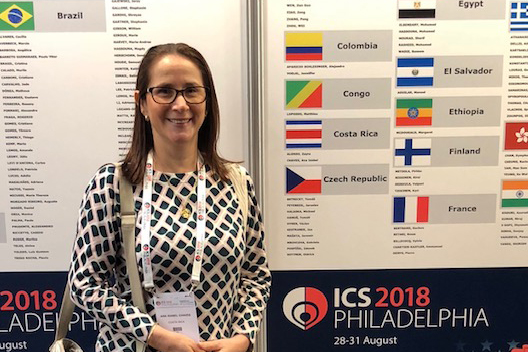 It all began with three little girls.

They played with their dolls, like so many others, but not dressing up or braiding hair. No, these dolls had been unlucky in life. They were gravely afflicted, day after day. The three sisters played doctor: questioning, preparing, operating on their tiny patients. Their destinies seemed to stretch before them, straight as arrows, into the halls of medicine.

One arrow landed in an unexpected place: not only in medicine, but in a branch no other woman in Costa Rica had ever pursued. As for so many students, the scales between one choice and another were tipped by an encouraging teacher. In this case, it was Dr. Willy Feinzaig, who envisioned a future of greater equity in this male-dominanted field.

She would go on to treat not only her own patients, but patients facing some of the toughest battles in her field: patients with physical disabilities at the National Rehabilitation Center, dealing with urological challenges. And, of course, she would keep a sharp eye on her patients’ health when it came to cancer. Her spirits would lift with each new public awareness campaign that motivated both women and men to keep a closer eye, to watch out for danger signs, to come to see her without delay, to keep their annual appointments.

She would watch over her patients as carefully as she had as a child. But this time, she’s a woman breaking ground: the first in her field, but not the last. This time, they’re real lives in her hands. So fragile. In need of tireless vigil.

Text by Katherine Stanley Obando, inspired by an audio sent to El Colectivo 506 by Costa Rica’s first female urologist, Ana Isabel Chaves Brenes about her love for her work. Our weekly Media Naranja column tells short love stories with a Costa Rican twist. During our October edition, “The Future of Cancer,” they are focused on stories related to those who face and treat this disease.