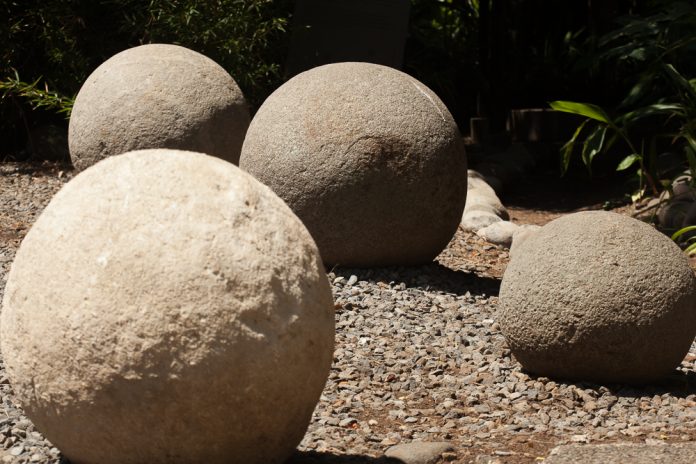 In the southwestern Pacific zone of Costa Rica, specifically in the delta between the Térraba and Sierpe rivers known as the Delta del Diquís, up to 300 examples of almost perfect stone spheres have been found. It is known that the spheres were an important element of a pre-Columbian culture that inhabited this region, and that their manufacture dates back to 400 AD. and until 1500 AD, but much more than that is not known.

How were they made? What tools did they use? Why did they do it? Represents? These are many of the questions that exist around the spheres of the diquís that have not yet been answered.

Stone spheres have been found in a huge variety of sizes ranging from tens of centimeters to more than two meters in diameter and 15 tons in weight.

Many wonder if these spheres are really the result of the ingenuity and dedication of the pre-Columbian indigenous populations that inhabited the south of Costa Rica, or if they will be the result of the passage of time on the malleable rock. After all, in other parts of the world you can find rounded rock formations. However, there are several characteristics that leave no doubt about the veracity of this sculptural work.

First, unlike a rock produced by natural action, the spheres of the diquís have a polished and smoothed surface that generates a color and a particular shine that is not observed in natural rock formations.

On the other hand, the number of spheres you find and the degree of symmetry of these, suggests that although it could be the result of the action of climate, water and time, it is too difficult to repeat this phenomenon with such precision and in so many and so varied sizes. Some spheres even show petroglyphs – or rock carvings – similar to others found on flat stone in the area.

In addition, the position and organized distribution in which the rocks have been found demonstrate that they had a cultural value for these pre-Columbian peoples, who created and cared for these sculptures for more than a millennium.

All the studies around the diquís spheres began in the 90s and have been carried out at the public level through the National Museum, and at the private level through the work of interested archaeologists, such as Mrs. Ifigenia Quintanilla, who has developed her Master’s research on the spheres and has published several books on the subject.

Since 2001 Costa Rica flirts with the idea of ​​achieving the declaration of the Diquís spheres as Cultural Heritage of Humanity, but it was not until the beginning of 2013 that the candidacy was officially presented to UNESCO, achieving the declaration in mid-2014 when The committee in charge of UNESCO confirmed the uniqueness of these pre-Columbian sculptural demonstrations, and how well cared for and protected by the country’s legislation.

Receiving this recognition is a source of pride for Costa Rica, but the most important thing is that it strengthens the commitment and responsibility to dedicate time and money to researching these sculptural expressions and thus begin to answer many of the questions that exist about this historical and cultural legacy.