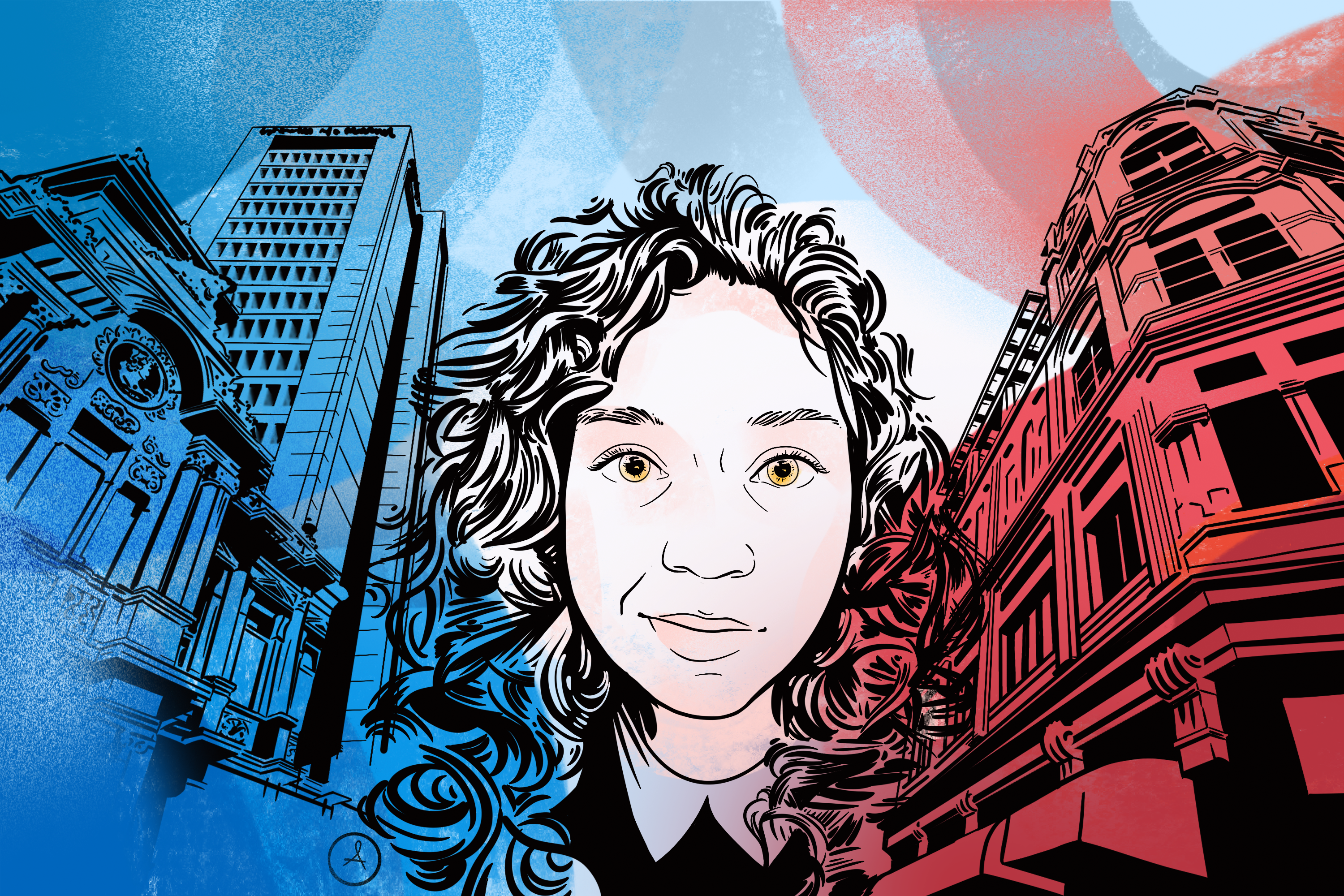 The woman looks at the camera. She is wearing a patterned headscarf and pink lipstick; leafy fronds wave to and fro in the background. On her bare arm, clearly visible in the foreground of the shot, two coins and what looks like a kitchen magnet cling to her skin as if by magic.

“My whole arm is magnetized,” she says.

It was one of dozens of videos and photos that have circulated around the world this year, claiming that the COVID-19 vaccine contains metals that cause patients’ arms to become magnetized: one more reason to avoid the vaccine.

In Costa Rica, the videos were viewed on YouTube, published on social media, and circulated via WhatsApp, a Facebook-owned messaging app. It reached the attention of national media organizations that consulted experts and even, in the case of entities like national Noticias Repretel, staged their own demonstrations, with smiling, recently vaccinated Costa Ricans looking on as coins and other metal objects fell to the sidewalk.

“I don’t feel anything, but let’s put it on there,” says the journalist to one woman sitting in a wheelchair outside a vaccination center before holding a metal key up to the woman’s arm.

“Gracias a Dios,” says the woman when it falls to the sidewalk with a clink. “Thank God.”

Messages like the magnetized-arm are part of what the World Health Organization calls an “infodemic,” and defines as  “too much information including false or misleading information in digital and physical environments during a disease outbreak… With growing digitization—an expansion of social media and internet use—information can spread more rapidly. This can help to more quickly fill information voids but can also amplify harmful messages.”

These messages, of course, are also part of the broader phenomenon that predates the pandemic, but has been significantly affected and worsened by it: misinformation and fake news. Costa Rican journalists and media observers describe watching in fear as fake news flared in the States during the 2016 presidential elections, and then, predictably, showed itself in Costa Rica as well, as it has in most democracies in the world. The 2018 contest here revolved around controversy related to LGBTQ+ rights, so false reports about those issues have been rife, as have fake news items related to Nicaraguan immigrants. Then the COVID-19 pandemic made the population desperate for information in a new way, and ushered in the infodemic, with wave upon wave of information true and false about how the disease spreads and can be combated.

“We’re at a crossroads,” says Gustavo Román, an advisor to Costa Rica’s Supreme Elections Tribunal (TSE). “Either we, as a society, find ways to recover the health of our public discourse, or it is going to be very hard for us to keep living together.”

“For me, we’re heading towards the edge of a cliff right now,” says journalist Ernesto Núñez, who has developed a verification project as part of his media organization, La doble tracción.

How did this international challenge for all democracies get so bad in Costa Rica, where a handful national news channels and national newspapers ruled the roost for so long? In a country that loves memes and jokes, when is fake news frivolous, and when is it deadly serious? How deep does Costa Rica’s polarization run, and what role is the media playing in that process?

How did we reach this cliff’s edge, and what’s the view from here?

In a nutshell, Costa Rica’s fake news operations can be described at the time of this writing as increasingly pervasive, though homespun. The German political scientist Simone Bunse published a report in 2020 about the phenomenon of cyber troops—political actors with the objective of manipulating public opinion online—in Costa Rica.

“Costa Rican cyber troops are homegrown and homemade, and… various political parties, civil society organizations and individuals have been implicated in spreading disinformation deliberately during election campaigns, promoting anti-establishment populist, homophobic, and xenophobic discourses,” she writes. However, as of 2020, “cyber troops in Costa Rica have lacked the level of sophistication we have seen in Brazil, Mexico, or Colombia.”

Gustavo Román, who mentions Bunse’s work as a reference point, adds that while this is good news on the one hand, the methods of misinformation in Costa Rica have significant impact because they fit the country’s personality.

“We don’t have any evidence of a Cambridge Analytica in Costa Rica yet,” he says, referring to the massive scandal related to the misuse of Facebook user information by the Donald Trump campaign. “However, this doesn’t make the misinformation we see in this country any less effective. In fact, their artisanal or ‘tropicalized’ nature is a good fit for the Costa Rican context. This makes them very effective when spread, and they’re difficult for the [verification] platforms to detect.”

A look back at events in Costa Rica over the past three years show just how effective misinformation has been in provoking action. In 2018, fake reports that Nicaraguan  immigrants were burning flags led to a xenophic protest in the middle of San José. In 2019, Public Education Minister Edgar Mora resigned in the face of waves of protests, some directly linked to misinformation about the ministry’s policies related to LGBTQ+ rights. And in 2021, misinformation has been explicitly blamed for resistance to the COVID-19 vaccination, particularly in rural San Carlos.

As these trends grew, journalists in Costa Rica did not stand idly by. A number of initiatives sprung up in an attempt to identify and call out fake news, and spread verified information. An initial sweep to learn about these efforts stops just a few kilometers from downtown San José—but it doesn’t end there.

Gustavo Arias started lobbying for the creation of #NoComaCuento (a popular expression along the lines of “Don’t get taken in”) at Costa Rica’s newspaper of record, La Nación, in 2016, as he watched what was unfolding in the U.S. elections.

“I saw a possibility for La Nación to do its part in the fight against misinformation, and a project that would be out of the box for La Nación on social media,” he says.

The project roared to life in 2018 in the context of Costa Rica’s own elections, after a marriage equality ruling by the Inter-American Court of Human Rights caused a wave of backlash and false news reports in Costa Rica. However, the project soon took on a wide variety of topics far beyond electoral politics, and, in 2020, became frequently involved in correcting fake news regarding COVID-19.

Gustavo left La Nación in February 2021 and now works as the digital director at a communications agency. Today, #NoComaCuento is led by Sofia Chinchilla, who, now working from home like most La Nación collaborators—she’s assigned to #NoComaCuento on a half time basis, with her remaining time focused on data journalism at La Nación—undertakes a grueling daily routine of fact-checking. From the dining room table of her home in Cartago, she collects information about fake news that’s circulating through a WhatsApp chatbot, email, and, of course, her own daily monitoring of social media groups and news pages. Over time, No Coma Cuento has learned where to look, she says.

“There are Facebook pages or profiles that tend to be repeat offenders in sharing misinformation,” she says. “We can all share a video that’s not true, and we don’t do it maliciously… but there are people who do it on purpose.”

She chooses the topics to focus on, consults experts in the field, and generates notes on La Nacion’s site (No Coma Cuento pieces are offered for free and are not behind the newspaper’s paywall), WhatsApp messages and a podcast. A recent target this year: the magnetized-arm story. “It was everywhere,” Sofía says.

As #NoComaCuento was finding its voice in 2018, people a few kilometers away on the University of Costa Rica’s leafy campus in San Pedro were taking note. Andrea Alvarado, the head of communications at the UCR, hired journalist Dario Chinchilla to start a verification project called Doble Check, which initially lived at Semanario Universidad.

“We knew that #NoComaCuento existed,” says Dario. “We thought it was a valuable initiative, but that it had certain limitations… #NoComaCuento was primarily focused on anonymous misinformation that circulated on social media.” The team at Doble Check decided to add a focus on public figures and media organizations.

With the slogan “The truth about lies,” Dario and his colleagues developed a robust readership (more than 25,000 people follow the initiative on Facebook, for example), but the project was suspended in 2021 when Dario moved to Panama for family reasons; an administrative delay has prevented his position as the head of the project from being filled, although the replacement process is underway and Doble Check has now been integrated into the Radios de la UCR. However, Dario, like Sofía, points to a limitation on his project that has nothing to do with staffing.

“I thought we were going to be able to reach many more people than we did,” he says now, reflecting on the project from his home in Panama. “It turns out that there’s a natural audience for these initiatives that are, well: news junkies.”

Gustavo Arias, the founder of #NoComaCuento, echoes this idea that the real battle against fake news and disinformation lies far beyond Tibás or San Pedro—outside of the GAM, or Greater Metropolitan Area, which sprawls across much of Costa Rica’s Central Valley.

“A concern I continue to have is that the media organizations in the GAM, we’re always talking to the same people,” he says. “Most media that do serious, methodical work, their audience is the same, or we’re quite close to each other.”

What’s happening, then, in Costa Rican news, beyond the glut of national newspapers and news stations in the capital?

How is the struggle against misinformation being waged in communities where those media organizations, which themselves have fewer and fewer resources to dedicate to rural coverage, are increasingly irrelevant or even openly distrusted?

Next week: why regional media are the front lines in Costa Rica’s fake news battle, and the journalists who are heading home to do something about it.

During this month of September, we’re turning our attention at El Colectivo 506 to the health of our democracy, and how disinformation and fake news is causing new symptoms in our society. Join us for “Infodemic,” a month behind the scenes of Costa Rican news. View the complete edition here. We are pleased to be partnering with artist and graphic designer Allan Fonseca, who is creating the illustrations for “Infodemic,” including this week’s illustration of #NoComaCuento’s Sofia Chinchilla. Learn more about Allan here.

Of presidents and kings