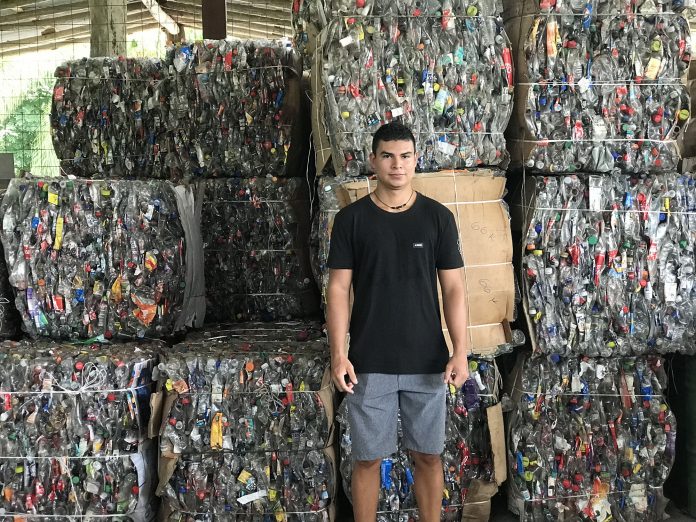 For two years and six months, Jafet Vilegas has been getting up every weekday at 6 am. He takes his time to say hello to his cats and dogs and then helps his mom make breakfast, which he eats with his family. Then, he puts on his uniform to go to work, gets on his motorcycle, and drives five minutes through the green streets of Cóbano, Nicoya Peninsula, to the recycling plant.

Jafet works as a recycling collector for the Waterkeeper-Bionic Recycling Center.

“There are thousands of jobs in this world, and they are all important,” says Jafet, “but jobs like this are very important today. If there were no people working on this, the planet would be destroyed.”

Jafet works with evident satisfaction. Whether it’s the rainy season or the oppressive summer, he always wears a smile. It saddens him to see that people sometimes fail to understand the significance of his work, but he knows that day by day, he can change the world.

Jafet was born and raised in Cobano. He is 21 years old and has been working since he was 13. In high school, he worked in construction and selling clothes. At 19, in 2018, he started working at the recycling center.

He’s tall, dark from so much swimming in the sea under the sun. He’s always impeccably dressed and groomed. Since all that one is on the inside is also on the outside, he cares about his personal cleanliness just as he cares about the cleanliness of the town. One would imagine that working with recycling is being in constant contact with dirt; however, this is not the case, and Jafet is a clear example. His co-workers always make fun of him for being so neat.

He swims in the open sea every weekend, and likes to hang out with his younger sister or with his friends. He listens to music to relax and, from a young age, his compassion and love for animals led him to act differently from the rest. For Jafet, animals have the same right to a dignified life as people. He says that’s why a clean town and recycling are so essential in order to take care of our biodiversity and the living beings that compose it. We are all important. We are all connected.

The waves of transparent bags

At 7 am, Jafet arrives at the plant where he meets co-workers, who are also his friends. The first task of the day is to clean the truck that will accompany them on the recycling collection route.

Some mornings, before starting the route, Jafet, Roy (the truck driver) and the third musketeer of the day pause to charge their batteries: they stop in Playa Carmen and sit on a fallen palm tree, have a soda and a bit of bread while watching the waves and surfers, and being inspired by the energy of the ocean before starting the hard work. Tough, but very satisfying.

They leave the sea behind to go in search of the first transparent bags that the neighbors have left out, filled with glass, plastic, tetrabrik and aluminum. Families in the community tend to be very grateful for this work and let the workers know. They give them water or bread. Jafet returns their gratitude with a smile.

Jafet says it is the first job he has that fills him so much with satisfaction. He gets on the truck every day with joy, knowing that his actions are helping to clean up this community that saw him grow. He knows that it is not only cleaning, but also protecting life on this planet from our pollution.

From 8:30 am to noon they follow the collection route. Then they come to the Recycling Center and unload everything they’ve collected. Typically, this is three tons of recycling per day. The next step is to separate according to the material, and then to process it. Processing means cleaning it, removing the labels and lids, dividing it by color, weighing it, and shredding it. Each kind of material has different destinations and processes. Finally, they leave the truck ready for the next day, and finish up.

At the end of the work day they take a moment to rest and play basketball, or share a snack.

No bed of roses

What motivates Jafet to do his job is to see the beaches clean and free of garbage. It’s knowing that through his work, he is preventing a turtle or a fish from eating garbage. He says it inspires him to hear the sounds of nature while collecting recycling, as if it were a song of thanks.

The Waterkeeper-Bionic Recycling Center is surrounded by exorbitant flora. It’s flanked on one side by a lagoon and on the other by the Lacón Nursery. It’s a paradise. Jafet calls it the “Salvation Center,” but not because it coexists with howler monkeys, squirrels and iguanas, or because it is surrounded by plants so green that they appear fluorescent. Jafet remembers that when he was a child there was no recycling plant and many people carried out harmful practices such as burning plastic or throwing it in the street. Now, many materials that were previously junk are worth something. They have a place to go. That is why his workplace is helping save the planet.

But not everything is rosy. Jafet has come across neighbors who handed him dirty recycling, or questioned him for “filling his pockets with money from their recycling.” Jafet learned to turn a deaf ear and always focus on the positive aspects of his work.

Recycling is not garbage. Recyclable materials are clean products that each family washes and dries, and above all else, unlike garbage, they have a value. They are going to be converted into new products. Jafet understands this perfectly.

Recycling is our last option to reduce our pollution. The first thing is to stop consuming products that we do not need: questioning whether we really need that straw in our smoothie or disposable cutlery for our casado. If we cannot reject it, we should reduce its use and reuse what we consume. Finally, if we have no choice but to buy it, it is important to recycle it. We must be aware that what we throw away does not disappear from this planet. It only disappears from our sight. Your first toothbrush is still somewhere in this world. That’s why we must open our eyes and see the impact generated by our actions.

If you are interested in this work and want to help, you can do it in various ways. Nicoya Peninsula Waterkeeper has a membership program where individuals, families or businesses become members through an annual donation. If you are near Santa Teresa, you can volunteer with us, helping us to process the materials in the Recycling Center. Finally, if you come to visit the southern Nicoya Peninsula, do not forget that you have a free and easy option to recycle. For Jafet, it would be an honor to collect your recyclable products and process them in order to give them a new life.

Stories created under the “Directory 506” byline are a joint effort between the editorial team of El Colectivo 506 and the entrepreneurs and organizations that participate in our national directory of rural tourism. This piece was created thanks to the talents and writing of Mariana Cassini, communications coordinator for Nicoya Península Waterkeeper. You can learn more about Nicoya Península Waterkeeper here, and about their partner at the recycling center, Bionic Yarn, here. Donations can also be made to Nicoya Peninsula Waterkeeper through Amigos of Costa Rica, here; Amigos of Costa Rica receives financial support from the CRUSA Foundation. For more information about Directory 506, send a WhatsApp message to 8506-1506 or email us at [email protected].

Did you know that death from colorectal cancer is almost 100%...

Death is a question; who will answer?

Did you know that death from colorectal cancer is almost 100% preventable?