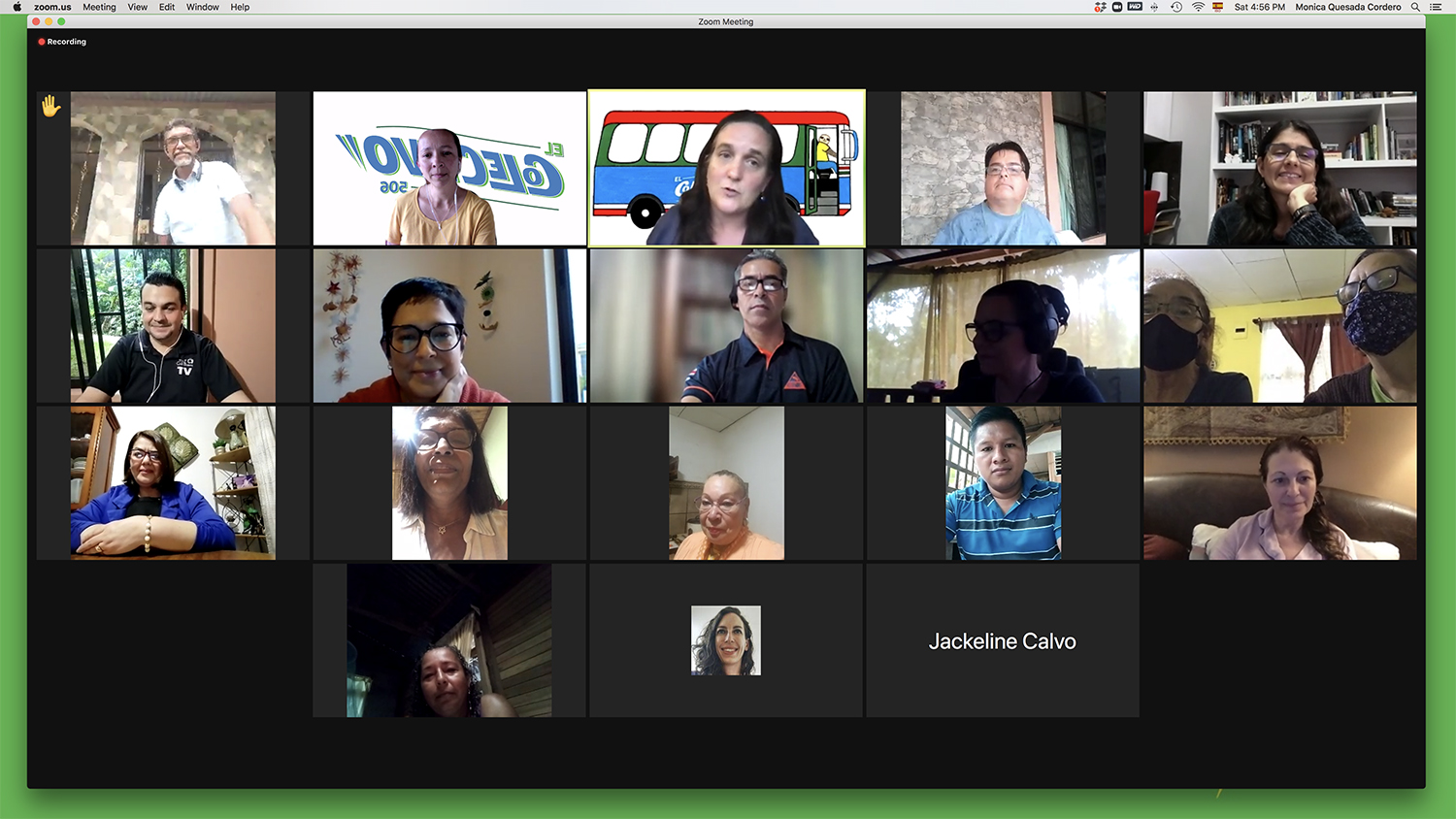 When I was in second grade, the mother of my friend and classmate María Luisa said something to me that I carry with me to this day. In my memory, she said to me, out of nowhere: “Mónica, you should be a journalist.” I have no idea why she said it. The truth is, I don’t remember much more than the stairs to the second floor of their white house, the bars of their portón, and stopping by for María Luisa every day so we could walk together to school. But I can remember my response to her as if it were yesterday: “I don’t want to be a journalist. Journalists only bring bad news. “

If Maria Luisa’s mother could see me now, she probably would laugh and say, “I told you so.”

I am a journalist and a photojournalist. I’m also the co-founder of a media organization that produces journalism that informs, denounces, and shines a spotlight, but does not stop there. The journalism we strive for is not content with delivering only bad news. Our journalism seeks to investigate and report on what is being done to solve the problems—not what could be done, or what should be done—to solve these problems.

Together, the three of us—journalist Katherine Stanley, rural entrepreneur Pippa Kelly, and I, Mónica Quesada—founded El Colectivo 506 on September 15th, 2020. Running on pure intuition, we began to materialize our deep desire to contribute to Costa Rica, especially rural Costa Rica, with our know-how. We began to nose out opportunities that could help us build strong foundations for our new organization. First came the National Geographic Emergency Fund for COVID-19 Journalists. Then came the opportunity that we’re celebrating today, and that answered that childhood exchange of opinions with María Luisa’s mother.

On December 9th, 2020, we received the incredible news at El Colectivo 506 that our application had been selected for the LEDE Fellowship of the Solutions Journalism Network (SJN) in the United States. Not only did they honor us with months of training and support, but they also gave us a scholarship to finance one of the editions that we’d dreamed about during the founding of El Colectivo 506. That July 2021 edition, “Watershed,” filled us with great pride, but after one year as a LEDE Fellow, we achieved something else as well: we managed to name and give shape to the type of communication organization that we are today.

In this, our first installment of our December edition, “Rearview,” we want to reflect on solutions journalism and the rural journalists who have accompanied us on this path of purposeful reporting.

Before going further, we want to invite you to a special event where you can learn more about our LEDE Fellowship and the work that all 25 recipients have carried out around the world in 2021. The LEDE EXPO will be held next Wednesday, December 8th at 10 am Costa Rica time.  Register here and join us!

Torrential rains. Houses full of mud or, worse, in a state of collapse, washed away on steep terrain. Families in a state of shock, bedraggled, arriving at hospitals or makeshift shelters.

I saw these scenes over and over again, always from afar, when I worked in the civil sector of Costa Rica and often helped develop fundraising efforts in the wake of such crises. As a journalist, I was always frustrated when I talked with people who were learning from their tragedies, implementing good practices and finding solutions, but couldn’t seem to find spaces to share that information. They didn’t have time; they were community leaders with the weight of the world on their shoulders. But that’s precisely where journalism can step in and build bridges. I knew there was a void there, although at that time I had no journalistic allies up my sleeve.

“Watershed.” Our work with the Solutions Journalism Network throughout 2021. The identity that quickly and naturally formed for El Colectivo 506 as a media organization pursuing solutions journalism. All of these things have all been a response to that frustration. A first step towards filling that void.

Not only Mónica and I, but also the journalists who joined the project—also from sheer intuition, showing great faith in us, assuming heavy workloads when they already had multiple responsibilities in their day jobs— were able to verify that solutions journalism it’s not just about reporting the positive. It’s about pushing, always pushing. In the interview, when you reach “The situation is just horrible,” you push: “And who is doing something about it?” When the answer is, “Nobody. There’s no solution,” you push: “Has anything ever worked, anywhere? Is there a place in the world where someone is finding a way forward in a similar situation?”

You would think that the interviewees would get annoyed with so many questions, but you know what? More than once, interviewees—teachers or cabinet ministers or leaders of community organizations—thanked us after an interview that had extended far beyond what was planned, for “letting me talk about this.” More than once, a leader of an entity pointed out a new idea that had occurred to him during our extensive conversations. That is also the power of a journalist: beyond questioning, we have the opportunity, from time to time, to create a space, an excuse to think deeply about the things we take for granted. That is something that everyone needs today.

But that’s not even the most exciting thing. The most exciting thing is when the stories are not created by Monica or me, but by people from the rural communities portrayed—an essential part of the mission of El Colectivo 506. As soon as we saw the opportunity for the LEDE Scholarship, we knew that we wanted to create a national network of people passionate about solutions journalism, and if possible, to finance journalism by network members. Our work this year showed us that it can be done, and that the journalistic talent in the rural communities of Costa Rica is extraordinary. More than extraordinary—it is essential. This country, with its gaps and inequalities, needs those voices to be lifted up if we are to build a better future.

Some of the Network 506 (Red 506, in Spanish) journalists talked to us this week about the impact of the solutions journalism they did with El Colectivo 506: on themselves, and on their communities.

Esteban Calderón of Costa Ballena TV, which reports on the central and southern Pacific coast, reported for El Colectivo 506 on the long history of flooding in Ciudad Cortés. He says now, months later, that the experience has changed how he does journalism overall.

“I had never done solutions journalism, and I had practically never written either. Video, television, is more my thing,” he said this week. “Normally you go, you do the interview, and you inform, just like that. But with solutions journalism it’s totally different. You have to go to the root.”

Last weekend, he traveled for Costa Ballena TV to the community of Rancho Quemado, on the Osa Peninsula, for a very important annual event: the Festival del Chancho del Monte, or Peccary Festival. He says he’d usually just interview the managers about the basics of the festival, edit the video, and be done. But this time it was different.

“Now, I was interested in other things,” he relates. He explains that this year, he also asked what the peccary population was when the founders of the festival first arrived in the region: it turns out that they were almost at the point of extinction. Then Esteban asked what actions the community had taken over the past 15 years to help this population recover. He even spoke with scientists there to get a broader perspective.

“That’s the impact this has had on me,” he says.

Karina Méndez reported for “Watershed” on the lessons learned in the Monte Verde cloud forest community, during and after the passage of Tropical Storm Nate through Costa Rica.

“I had feedback from people who read the document, people who went there at the time, such as the former head of the district. They said that the compilation of information was very good, that there were things there that hadn’t even occurred to them,” she says now. “It is really gratifying.”

Katherine Benavides left a career in journalism in San José in 2016 to suddenly return home to help her mother after the devastating impact of Hurricane Otto on the northern communities of Upala and Bijagua. She reported on the early warning system that was born out of that tragedy. Katherine says that her work with El Colectivo 506 gives her great satisfaction because many of her neighbors have told her that now that they have read her report, they understand for the first time how the system works. However, experience has also taught her that it’s essential that Costa Rica not let these conversations drop.

“We should not talk about emergencies or early warning systems only when there are rains or there is some kind of vulnerability. It is a topic that must be discussed all the time. The municipality should make infographics… about how the system should work, how the siren should work,” she says. We need “more education on that level.”

And she wants to see more solutions journalism in general—in her hometown of Upala, and in her country.

“I didn’t know about solutions journalism before, but I realized that it is necessary,” says Katherine. “I am glad that El Colectivo 506 is the first national media organization that considers solutions journalism as an opportunity to provide information in the most timely, most truthful way, and more in the way that we need. Sometimes they only talk to us about negativity. We don’t realize that we can speak and learn more efficiently, including the pros and the things that need to be worked on. Solutions journalism is totally new, and we must apply it more.”

These three journalists from our July issue were part of a solutions approach that dominated our editions throughout the year: from the rights of women, migrants, and the LGBTIQ + population, to exploring community conservation in our national parks, or the impact of COVID on rural tourism. For our second year, we have even more ambitious plans.

On environmental, economic and social issues; from coast to coast and border to border; here at El Colectivo 506, we will seek to fulfill the mission that Esteban, Karina, and Katherine exemplify.

Blame it on María Luisa’s mom.

Reclaiming culture on a plate: the roots and producers of Costa Rica’s traditional cuisine