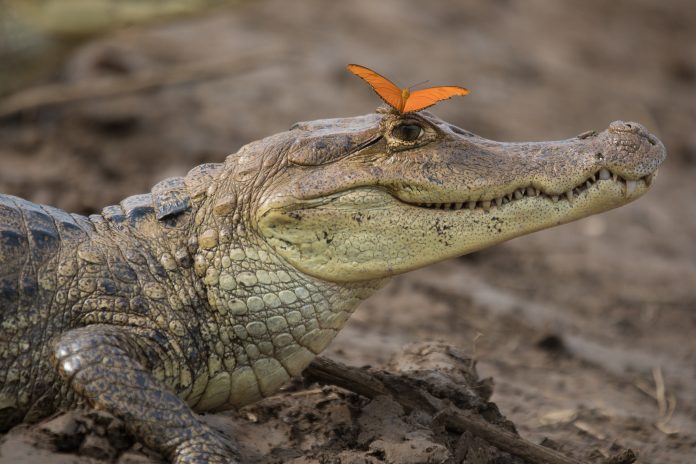 Costa Rica’s rivers, lakes, and sometimes even beaches have abundant populations of Crocodilians, a group of prehistoric predators who in one form or another have inhabited the planet’s tropical waters since the age of the dinosaurs, or roughly 84 million years. Chances are pretty high that if you are close to any lowland body of water and carefully scrutinize each apparent log-shaped creature eventually you will find one with a pulse. Here is a brief identification guide for those interested in understanding the differences between the two species found in Costa Rica, the Spectacled Caiman, and the American Crocodile.

While both the Spectacled Caiman (left) and the American Crocodile (right) are scale-covered toothy semi-aquatic reptiles, they actually come from two separate families within the Order Crocodylia. The American Crocodile is a true crocodile, coming from the Crocodilydae family, whereas the Spectacled Caiman is actually more closely related to the American Alligator coming from the family Alligatoridae.

Generally speaking, this will be the best indicator to tell the two apart. American Crocodiles (left) are much larger, and can grow up to 6 meters (20 feet), and weigh in excess of 900 kilos (2000 lbs). Spectacled Caiman (right) are smaller, growing up to 2.5 meters (8 feet) and weighing in at 60 kilos (130 lbs).

For the most part, all true crocodiles including the American Crocodile (right) have much longer narrower V-shaped snouts. The Spectacled Caiman (left), similar to its larger cousin the American Alligator, has a much wider shorter U-shaped snout. Scientists believe that true alligators developed the wider snouts to crush prey with really hard exteriors like turtles, whereas the crocodile snout is more of a general practitioner made for an array of food.

The upper jaw of all Alligatoridae, including Spectacled Caiman (left), is much wider than the lower jaw. Teeth fit into special pits in the top jaw, and when their mouths are closed they appear to not have any visible lower teeth. The American Crocodile (right) on the other hand has an equally wide upper and lower jaw, and teeth interlock when the mouth is closed.

Due to their size difference, American Crocodiles (left) are more often than not found in larger rivers and lakes. They also have a gland allowing them to inhabit saltwater, and often times as the rainy season begins in late April they are seen swimming in the open ocean to move from river to river. Spectacled Caiman (right) on the other hand inhabit much smaller water systems like jungle streams and swamps and they are unable to process salt.

While there are extremely rare cases around the world each year of humans and/or the family pet falling victim to a large Crocodilian, most want nothing to do with humans and will dive headfirst into the water if approached. So don’t be alarmed if you encounter such a living dinosaur, but remember that all wild creatures are best observed from a safe distance.

A dog’s life, and a worthy one